Today we start the stage with the same companion who brought us to Györ on the previous stage, namely the Rába River. We follow him on the dam, which is supposed to keep him in his planned path. Later we come to a meadow where we will encounter a special bird world, and then we come to the Marcaler backwater. When we leave this river we will follow the main road for a while, which leads us into the mountains of the picturesque Sokoró Mountains. We leave this main road again later and pass a memorial stone on the ridge that reminds of the Rákóczi freedom fight. Later we come to a stone lookout point that dates back to Napoleonic times. The French artillery fire control center was set up here during the Kisberian battle. On the hike along this mountain ridge we pass the weekend houses of Gyorújbarát, come to a lookout tower that offers a wonderful view, and a transmission tower has also found a suitable place up here to do its job. Back on the plain, we will hike from Écs next to a road that leads us to the stage. Our route ends there at the Roman Catholic Church «Gyümölcsoltó Boldogasszony». Pannonhalma is a tourist attractive and therefore popular city and therefore has a wide range of food and accommodation options. The Benedictine monastery of the same name, the Martinsberg Archabbey, which has been a UNESCO World Heritage Site since 1996, rises on the local Martinsberg! More on this at the beginning of the next stage.

HERE TO DOWNLOAD THE GPS ON YOUR MOBILE ROUTE 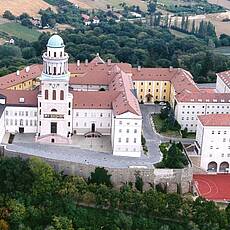