Today's stage runs in another and final region on our way through Spain, namely the Aragón region, which essentially covers the western flank of the Pyrenees. The Spanish route for the connection between Arles and Puente La Reina, the Camino, also runs through this region Just Aragónes. Our stage consists of crossing the Río Arga, with which we also say goodbye to yesterday's companion. This is followed by an initial ascent to the height of «Alto de Erro», followed by a hike on high-altitude trails in the Pyrenees, which again bring us a series of shorter ascents and descents. In between we always have contact with the main road that leads from Pamplona to France. Today's stage consists essentially of the Santa Maria de Roncesvalles monastery complex, which has enough sleeping accommodations even in peak months. 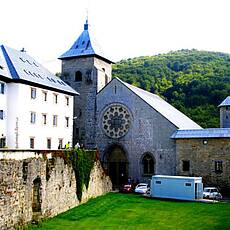