With this stage we leave Spain and come to the next country on the Jerusalem Way: France! At the same time we reach the culmination point / the high point of our Pyrenees crossing today at more than 1.400 meters above sea level. The next high pass awaits us again in Austria. At 1.800 meters above sea level, the Arlberg Pass is even higher than our current pass here in the Pyrenees.

Today we also end the section that many pilgrims refer to as "The Way of St. James". But as I said at the first stage in Finisterre, we made pilgrimages from west to east. This gave us "our backs" and new encounters with pilgrims from all over the world every day.

By the way, crossing the Pyrenees is easier for us than in the opposite direction, because the Santa Maria de Roncevalles monastery is significantly higher than our stage destination St. Jean-Pied-de-Port. Saint-Jean-Pied-de-Port is already in France, it goes back to a Roman settlement and today lives mainly from the privileged location on the pilgrimage route. Many pilgrims start the Camino de Santiago here, it is no longer a place to be alone with yourself, many pilgrims cavort in the alleys here. 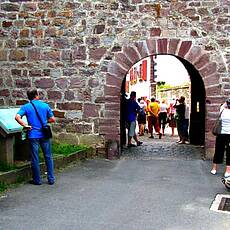