Today's stage runs through endless expanses in flat terrain with a slight incline. We hike along the busy Carretera for longer stretches and do not come across any large towns up to the stage destination Santo Domingo de la Calzada, but the smaller settlements along the route usually have a gas station, a bus stop, a restaurant and occasionally an albergue. At the beginning of this walk in Galicia, pilgrims with knowledge of the Spanish language may have had trouble understanding the locals - Galego, a Galician accent, is often spoken there. This problem no longer existed in the region of Castile and León. Now we face a new challenge: between Rededecilla del Camino and Grañon we move to the Rioja region, which is known for its good wines on the one hand, but which is also populated by Basques who speak Basque. We find the Basques not only on the rest of the way through Spain, but also on the first stages in France. At the stage with the melodious name we find a pilgrims' hostel in a former Cistercian monastery, and as an exclusive feature: a rooster and a chicken in a cage in the Romanesque-Gothic cathedral of the place, a tradition that is accompanied by a fable that is just one believe or not believe. 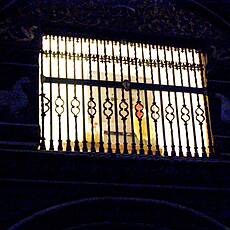