Jerusalem Way is the world's longest pilgrimage and international peace and culture route! 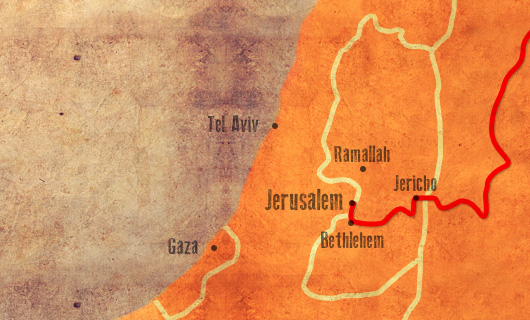 The route through Israel and Palestine is about 60 km.  GPS is available in the webshop, there are further details about the GPS and how to use the app.

General information on marking: Many areas and sections in over 15 countries on the JERUSALEM WAY have been marked in recent years. The completion is being worked on.

The route is historically designed in the best possible way and the path is fantastic, it leads via King Hussein Bridge - Jericho - Wadi Qelt - Judea Desert - Al-Eizariya / Bethanien - Mount of Olives - Jerusalem. Among other things through the area where Jesus once walked from the Jordan Valley to Jerusalem! So the pilgrim arrives even today - in the 21st century - from the historically significant side, on foot on the Mount of Olives! An incredible feeling with a unique view: Jerusalem lies at your feet!

Extract from the travel diary: We reach the baptism site of Jesus in Jordan, cross the Jordan and are then in Israel or the occupied West Bank. After Jericho, the ascent begins from the Jordan Valley, deep below sea level, to the highlands of Judea.

From there the path leads us through a majestic stone desert and after passing the last checkpoint we actually reach Bethlehem on foot on Christmas Eve and finally arrive in Jerusalem on December 26, 2010 - half a year after the pilgrimage began.