Today we return to the Lot river in the Lot department, which we could have followed from Cahors to Cajarc. However, in this section the Le Lot has lost its slope and, with its wide meanders, practically takes up the entire valley floor, even displacing the main road to the edge of the valley floor. Therefore we follow a historical alternative route between Cahors and Cajarc. This route leads over a limestone plateau, which we will still have under our feet in the subsequent stages. It is very poorly overgrown. Thanks to the oak trees growing here, however, the area is also blessed with truffles, which cannot be grown, and which are usually sought after with pigs or dogs trained on truffles. Limogne-en-Quercy is not particularly big, but it is still the largest place on today's stage. Our stage location Cajarc is culturally known as the birthplace of the successful novelist Françoise Sagan, who was born here on June 21, 1935. Cajarc and its hospital were an important base for pilgrims in the Middle Ages, and today Cajarc is known as the center of saffron cultivation, delicious both aromatic and financial. 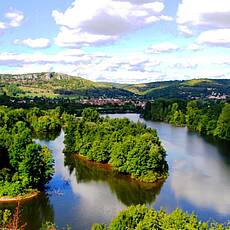