It may be that on this stage you get the feeling that the "oncoming pilgrims" traffic is decreasing. There can be a number of explanations for this. One of them is that as far as Saint Jean-le-Vieux we also meet pilgrims who have brought a substantial part of the pilgrims from north-west Europe here in two ways, namely the way from Paris and the Via Lemovicensis, the pilgrims from the East of Northern France as well as pilgrims from Belgium and Holland collects in Vézelay and brings them here on this second way. After a series of small towns and hamlets we come to the stage destination Larceveau-Arros-Cibits. The hostal is about 500 meters NE of the distinctive traffic junction on the D333. 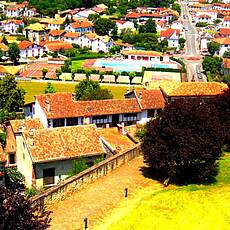