Today we hike a stage in hilly terrain again and at an altitude between 900 and 1100 meters above sea level. It is a stage in which we say goodbye. We say goodbye to the Auvergne region and the Haute-Loire department, in which we have now hiked for a few days. But we also say goodbye to the Velay, whose volcanic past has certainly left a lasting impression on all of us. It will be a relaxing stage, because we mostly walk on field and forest paths, the area is sparsely populated and the roads we encounter have little traffic. After a final ascent, we will reach the remote stage location Les Sétoux on a plateau, founded in the 13th century. 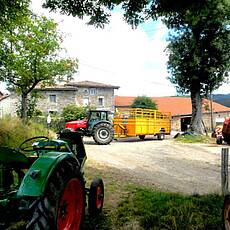