We surely enjoyed Cahors, the former Roman city “Divona Cadurcorum” and the weir bridge Pont Valentré. After breakfast in Cahors, we start again at the Pont Valentré and say goodbye to the Le Lot river, which we will only meet again at Cajarc. We choose a shorter and also with less traffic. The last 15 kilometers to the place «Bach» we follow a Roman path that is even older than the medieval pilgrimage routes, namely the Cami Ferrat, which later served as a trade route for a long time. The stage town of Varaire is a historical and small stage town, hopefully we will feel at home there too. 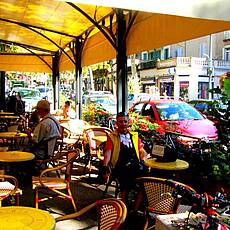