Today's stage is the last in the Acquitaine region and is also one of the longer stages. We start the path in the Dept. Pyrénées-Atlantiques (64) and then switch to Dept. before Pimbo. Country (40) in which we will spend the rest of the day. One can also realize that we are moving further and further away from the French Basque Country, not only because of the place names, but also because of the language, as French is increasingly spoken. The first actual place on this stage is Pimbo, where our path turns off after an ascent at the entrance to the village. Nevertheless, it is worth visiting the small town and perhaps having a second breakfast. Especially the Saint-Barthélemy church with its lovely Romanesque portal rewards us for this short detour. At Miramont-Sensacq we come across a lookout point and a church dedicated to the Apostle James with an original bell tower. The route usually slopes down slightly until we finally come to a reservoir, which we circle around. One of the sights of the stage is the Sainte-Quitterie church from the 11th century. The tower is unusually designed, and the tympanum at the entrance and the crypt are also worth a detour. 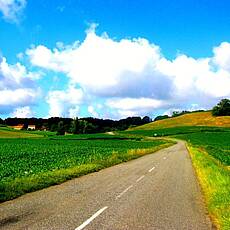