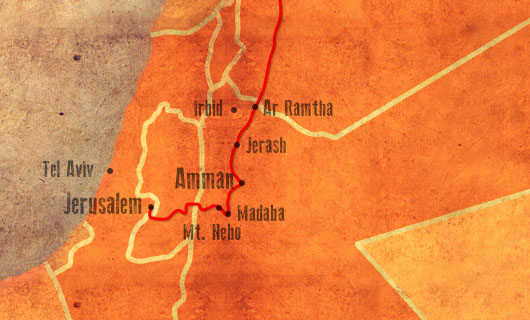 The route through Jordan is about 220 km. GPS is available in the webshop, there are further details about the GPS and how to use the app.

Overview of the stages in the Holy Land: open link here

Note: As described in the Turkey menu, entry into Syria is currently not possible. Unfortunately, Syria must be left out!

We therefore recommend flying from Antakya to Amman and then taking a bus north to Amman Ar Ramtha to drive. The city of Ar-Ramtha is the starting point of the JERUSALEM WAY in Jordan. Thus the complete route can be continued from Jordan, this has been tried and tested and has already been done by various pilgrims.

In Ar Ramtha there is good infrastructure, grocery stores and private accommodation for Jerusalem Way pilgrims! Registration for overnight stays is required! This pilgrim quarters is entered as a POI in the registered GPS app. The Jerusalem pilgrims experience great hospitality in Jordan, as they did before on their way through Turkey.

Info and contacts in the Holy Land

The JERUSALEM WAY International Peace Team has personal contacts and cooperation in Jordan, Palestine and Israel. We send these contacts to all registered GPS users on request, so that the pilgrims can contact them on site if necessary.

Route
The route through the Hashemite kingdom leads as far as possible away from traffic from the north of the country in Ar-Ramtha to Amman. Historic ground is reached right at the beginning - the world-renowned Decapolis city of Jerash, ancient Gerasa!

The route then continues to the capital Amman - here you should plan at least 2 days! We have already integrated all the most important sights into the GPS route! Then Madaba and Mount Nebo / Mount Moses, which offers an overwhelming view of the Jordan Valley and the landscape - meditative and picturesque at the same time. Now the route leads down to the lowest point on earth - the Jordan Valley - the Dead Sea - baptismal site in Bethany - Allenby Bridge / King Hussein Bridge - border Israel / Palestine.