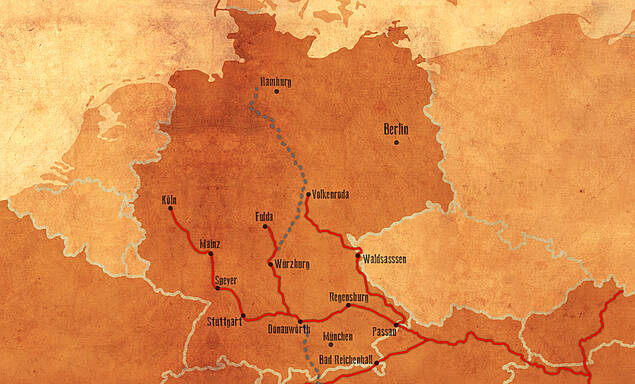 Germany has a stage on the JERUSALEM WAY main route (this leads through the so-called "Kleines Deutsches Eck" see at the end of this page) as well as three feeder routes.

The three feeders are main routes in Germany, which, similar to a river system, flow into the main route in Linz on the Danube (Austria).

The routes from Cologne and Fulda come together at Donauwörth, where the paths lead over the Friedensbrücke and run together in the vicinity of the Danube via Regensburg to Passau. In Passau, the path from Waldsassen (Volkenroda) is added, now all three paths continue together until they join the main route coming from Spain in Austria. 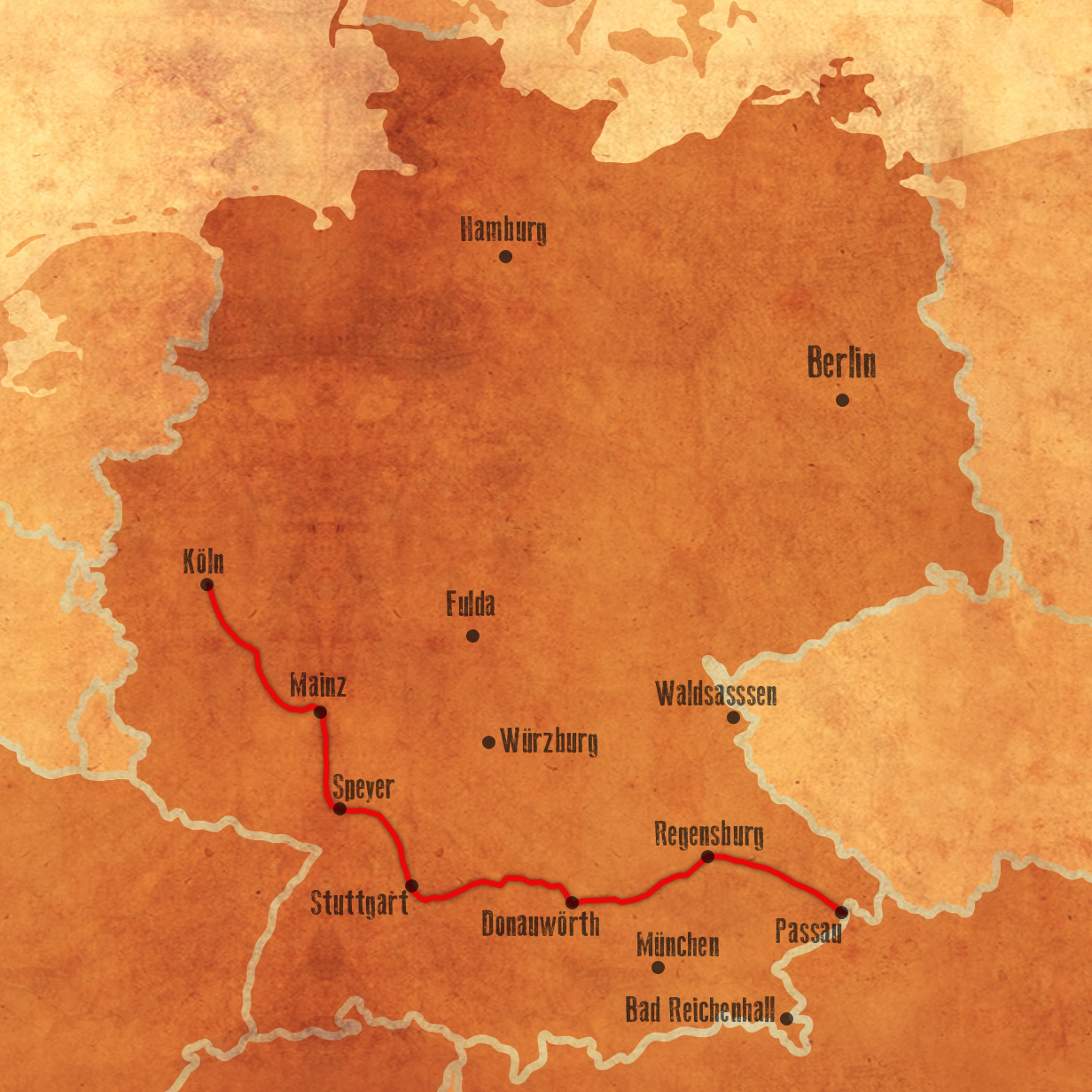 WAY OF THE KINGS 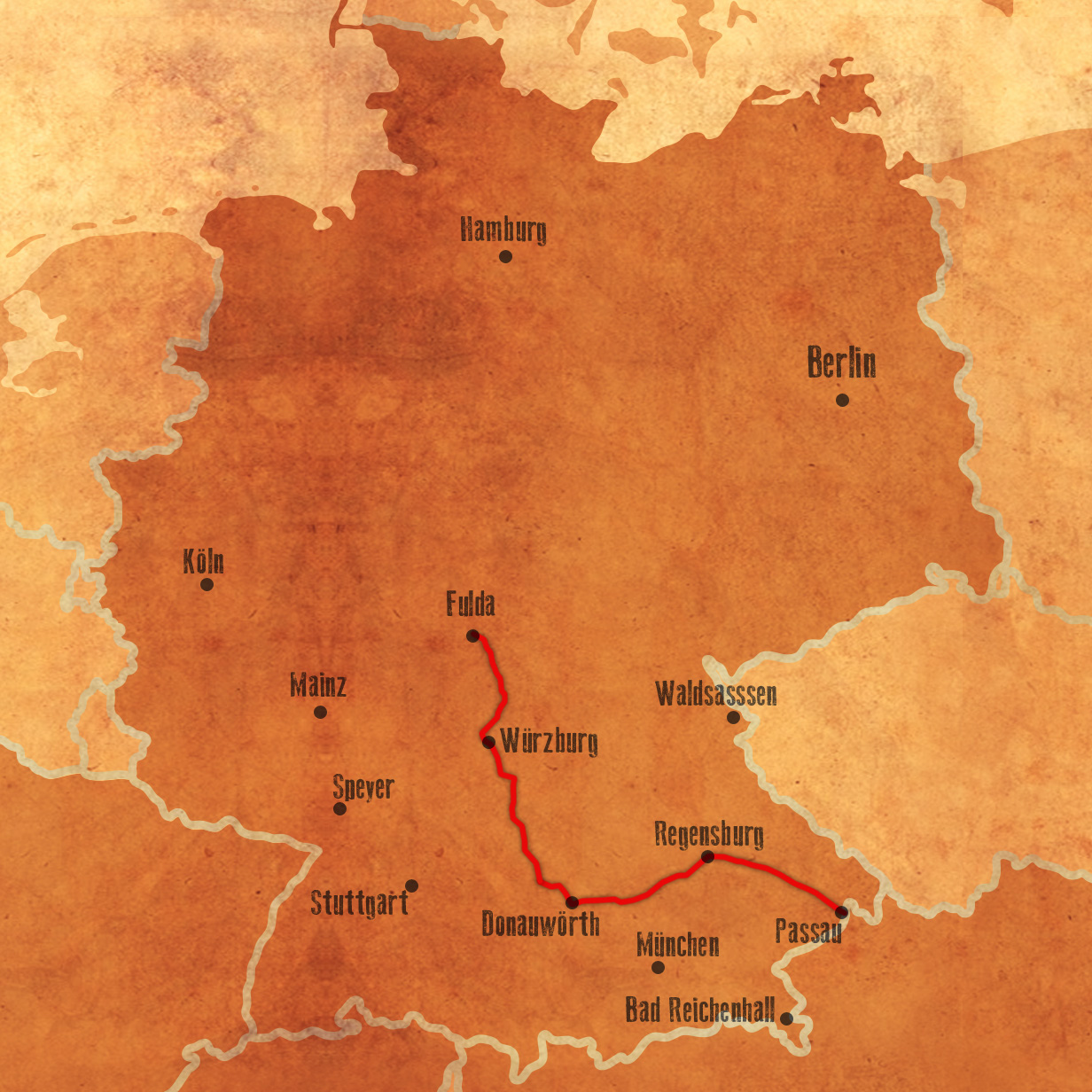 PATH OF THE APOSTLES 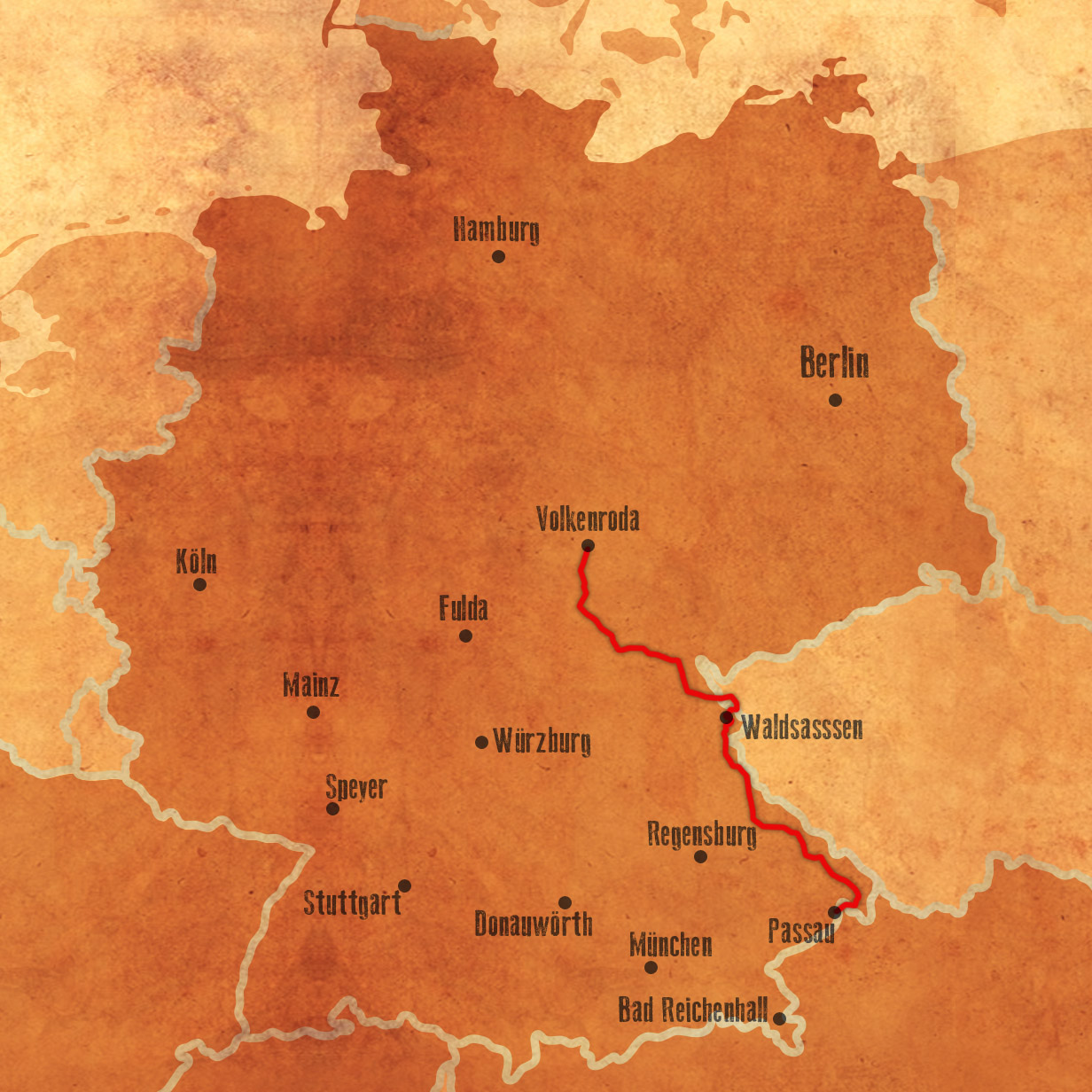 PATH OF THE MONASTERIES

In Germany, all geodata (GPS) for the three main routes are now set!

The JERUSALEM PATH OF THE KINGS leads from Cologne via Mainz, Worms and Speyer through the Kraichgau to the Neckar, where it leads via Stuttgart and Esslingen to the Kaiserberge with the Hohenstaufen. From there around the Ostalb, across the European watershed to the Ries and via Nördlingen to Donauwörth. From there, this route meets the path of the Apostles!

The JERUSALEMWAY OF THE APOSTLES leads from Fulda via Würzburg and Nördlingen to Donauwörth, from where both routes continue together to Passau.

The JERUSALEM PATH OF THE MONASTERIES leads from the Volkenroda monastery via the green belt to the Waldsassen monastery. From there on to Passau, where this path joins the other two paths (path of the kings and path of the apostles).

The three paths are based on long stretches of tried and tested hiking and pilgrimage routes, such as the Rheinsteig, the Martinus way, the Via Romea or the Via Porta.

The selection of the paths and, in some cases, the deviations from these partner routes were revised according to historical connections to historically documented departures and references to Jerusalem and according to the peculiarities of the Jerusalem pilgrimage routes.

The data for the Jerusalemweg Fulda are currently being checked and parallel cycle pilgrimage routes will then be defined. More routes will follow later. The work, which is not yet finished, is done through the active participation of several pilgrims. Status: June 2022

Information on the current status of GPS and route, questions about pilgrimage, as well as if someone would like to be part of Team Germany:

General information about the marking on the Jerusalemweg: In the meantime, many sections of the entire Jerusalemweg / Jerusalem Way have been marked in more than 15 countries.

Below is the Stage including GPS from the Jerusalem route main route (coming from Spain): 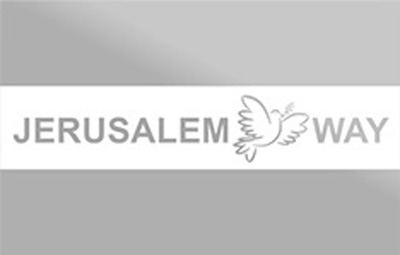