Longest peace walk in the world!

The JERUSALEM WAY is the longest path of peace and the longest pilgrimage path in the world! This international cultural route goes from the end of Europe in Finisterre to the beginning in Jerusalem.

The Jerusalem Way brings together different religions, nations and cultures in an extraordinary peace project and stands for mutual recognition, tolerance and appreciation of the different ways of life.

Jerusalem is the most important place for Christians and Jews, a holy place for Muslims and is considered the crossroads of world religions! The Jerusalem pilgrim reaches, among other things, many important historical places, several apostle tombs and numerous UNESCO World Heritage sites on the long way to Jerusalem.

The route network of the Jerusalem Way is similar to a river system, it connects various paths and routes on the way to the east. The Jerusalem Way has been spreading steadily since its foundation (2010) - 18 countries and 2 continents are currently connected!

Click on the desired country on the top of the map or select it from the menu.

GPS route is available from Spain to Jerusalem
(Distance about 7.500 km)

After years of development there has been a continuous Jerusalem Way route from Finisterre in Spain to Antakya in Turkey (since 2020). And also in Jordan, Palestine and Israel (Holy Land) the route is ready and available on GPS (total route length about 250 km).

Antakya, the ancient Antioch on the Orontes, is the end of the JERUSALEM WAY in Turkey and lies shortly before Syria. Entry into Syria is currently not possible, the borders are still closed. Unfortunately, Syria must be left out! We therefore recommend flying from Antakya by plane to Amman in Jordan and then taking a bus north to Ar-Ramtha. This city is the starting point of the JERUSALEM WAY in Jordan.

Thus, the entire route can be continued from Jordan, this has been tried and tested and has already been done by various pilgrims. Details see Jordan

Note: As an alternative, you could already try in southern Turkey (Silifke / Mersin area) to take a ferry via Cyprus to Haifa in Israel. In our view, however, this is not ideal for several reasons. The important further part of the journey would be missing in Turkey and Jordan and Palestine would be left out! Regardless of this, from Haifa one would not arrive historically significant via the Mount of Olives in Jerusalem, but rather reach Jerusalem via the New City. In summary, the pilgrim would skip elementary parts of the Holy Land!

The entire route from Finisterre to Budapest (about 3.500 km) is available online and can be obtained directly from the respective stage .

The complete further GPS route from Budapest to Jerusalem (about 4.000 km) can be ordered in our WEBSHOP for the desired countries. There you will also find the details regarding GPS and app, legal information and disclaimer.

The route is historically laid out and the path is fantastic. Among other things, the route runs through the very area where Jesus once walked from Jericho up to Jerusalem! The pilgrim arrives in Jerusalem today in the 21st century from the historically significant side - on foot on the Mount of Olives! An incredible feeling with a unique view: Jerusalem is at your feet!

MARKING THE WAY / WAY MARKER: GPS is the basis, so you can find the way! The markings (stickers and signs with dove of peace) are important additions to the GPS and show that you are correct. The path is not marked all the way through and work is underway to complete it. In the past few years, many sections have already been marked, there are already markings in all 15 countries from Spain to Jerusalem as well as in Poland and Slovakia.

NAVIGATION: A special JERUSALEM WAY app is being planned. We currently recommend the MAPY app. This app has proven itself very well, contains top map material (colored hiking map with contour lines and satellite maps)! And you can save the countries on the phone and then navigate OFFLINE! No internet is required on the go, this is very important, especially in "roaming" countries!

With the app you can easily find your way and interesting or historical POIs, because the route also leads directly to important sights in the cities! In addition, we have saved some POI for accommodations, these are constantly being expanded and updated. More information about the Use of the app see here

The pilgrimage to Jerusalem is of course an adventure and you have to improvise! In the spirit of an original pilgrimage, this is good and important and gives the pilgrim the opportunity to strengthen their trust in God and their confidence in life. This is one of the most important experiences on the long road to Jerusalem. After the pilgrimage we can use this experience in everyday life and pass it on to other people.

You are welcome to request our information sheet for pilgrims (PDF) with further information by e-mail: gps@jerusalemway.org

Review and background to the Jerusalem Way / Jerusalemweg

The entire route from Spain to Jerusalem is around 7.500 kilometers! Already in 2003 Johannes Aschauer (initiator JERUSALEM WAY) made a pilgrimage with a friend along the entire Way of St. James from Austria to Finisterre. Seven years later, in 2010, John set off on foot towards Jerusalem and was accompanied by two pilgrims: Austria, Hungary, Croatia, Serbia, Kosovo, North Macedonia, Greece, Turkey, Syria, Jordan and Israel / Palestine were the countries on the pilgrimage.

This spectacular and extraordinary pilgrimage led the three pilgrims through valleys and over mountains, through fertile stretches of land and barren deserts, along coastlines and rivers and finally through Syria shortly before the start of the war. They followed historical pilgrimage paths and new paths, met the traces of the Crusades and walked on historical paths of the Apostle Paul. After half a year they finally reached Bethlehem on foot on Christmas Eve and reached Jerusalem on December 26, 2010 (about 4.500 km).

As a result, the pilgrims initiated the beginning of the JERUSALEM WAY on December 21, 2012 in Finisterre with the message “From the end to the heart of Europe to the beginning” and thus established the world's longest pilgrimage and international peace and culture route: The Jerusalem Way 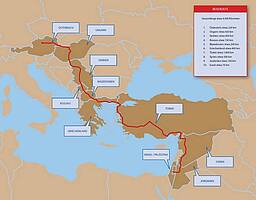 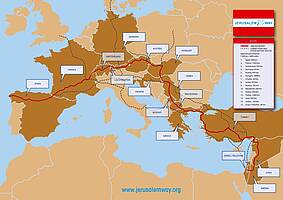