In Vienna for the first time the Jerusalemweg pilgrim pass including pilgrim's stamp will be issued whereby it is planned that Cardinal Schönborn personally this solemn act in St. Stephen's Cathedral will take over! A big, even epochal step and another bridge between the church and the international - connecting religions and peoples - JERUSALEM WAY peace project!

Personalities from politics, religion, sport and society support the peace project founded by the “Jerusalem Way Team”! The two Upper Austrian police officers Johannes Aschauer and Otto Klär made a pilgrimage with the former downhill world champion David Zwilling in 2010 from Upper Austria to Jerusalem, where they arrived after 4.500 months. The long pilgrimage took them for a month through what was then peaceful Syria, where they visited cities like Damascus or Aleppo, which are today hard-fought and destroyed.


Now this trio has the support of numerous personalities like Cardinal Schönborn, Bishop Schwarz, Cathedral pastor Toni Faber, politicians, such as Interior Minister Johanna Mikl-Leitner, State Secretary Reinhold Lopatka, Governor Erwin Pröll, Governor Josef Pühringer, Governor Hans Niessl, Governor Wilfried Haslauer, EU MP Josef Weidenholzer, EU MEP Othmar Weidenholzer, EU MP like Franz Klammer, Annemarie Moser-Pröll, Hansi Hinterseer, Alexandra Meisnitzer etc. an international peace project started, which should point out the current situation in Syria. In this project, the entire international community is called upon to work together for peace in this region. The prelude to this is now a short peace video, which was made during her one-month trip through Syria.

On November 28, 2013, a peace march took place on the Jerusalem Way including route markings from Salzburg via Linz (Mariendom) and the Mauthausen concentration camp to Arbing. Arrival was on December 5, 2013 (total about 200 km). THANKS TO THE MANY PILGRIMS!

Here is an excerpt from the media reports: Kronen Zeitung  / people's aid / Tips

Please support this peace project by forwarding this information to your contacts and sharing the video on the Internet, posting .. Peace concerns us ALL! 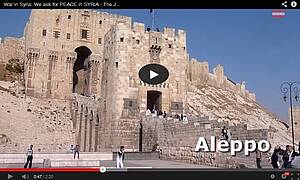 Jerusalemweg continues to draw circles and is developing into an international peace project!

Jerusalem pilgrims present peace project JERUSALEM WAY to the European Parliament Presidium and the Austrian Ambassador in Brussels (March 31.03.2013, 20.02.2013). Handover of the book to Barbara Stöckl in the ORF regional studio in Klagenfurt (February 21.12.2012th, 23.12.2012). Initiation of the peace project "JERUSALEM WAY", which unites religion and peoples, on December XNUMX, XNUMX in Finisterra, the "end of the world" in Spain (December XNUMX, XNUMX).

Bogotá: Around 2.000 participants from all over the world came to the congress. In the course of this, we were able to spread the key messages of the international peace project JERUSALEM WAY to all participants and met with great enthusiasm! Contacts were made, a basic network was established, perhaps a route through Jerusalem, from west to east, towards the sun. For peace in Colombia - in Jerusalem - in the world. Impressions of the pilgrimage:

Unique premiere - FILM in Vienna's STEPHANSDOM!
On Friday, October 5, 2012, the film lecture was held on three large-format screens Fundraiser for "Club Interior Ministry" - "Volkshilfe" - "Dompfarre Sankt Stephan" presented. About 2.000 visitors are in the fully occupied cathedral came - it was an unforgettable & unique evening! We would like to thank you for coming so many, as well as Jaro Reisinger from Hikingdays and the many other helpers for their participation in the organization! Thanks to YOU ​​we were allowed to "write history" in St. Stephen's Cathedral!

Book presentation and press conference with Mr. Cardinal Schönborn and Mr. Professor Girtler
On Thursday October 27, 2011 at 11.00 am, the presentation of the book "On the Jerusalem Way - From the Heart of Europe to Jerusalem" and a 4-minute film clip from our pilgrimage took place in the Pressehaus Club 5, Stephansplatz, Vienna.