Every journey begins with a first step...

The Jerusalem Way - The World's Longest Peace and Cultural Route!

- JOURNEY JOURNEY JORDAN / ISRAEL / PALESTINE 22.04. until May 04.05.2020th, XNUMX!
13 days flight trip On this extraordinary and unique trip, we experience the wonderful landscapes of the Holy Land in time in a balanced and fascinating combination on foot and by bus where the desert blooms! On the route of the Jerusalem Way through Jordan, Palestine and Israel, we slowly make pilgrimages to Jerusalem, away from the usual tourist paths, rest in the shade of the olive trees, wander through original landscapes, walk through Jewish and Arabian villages and breathe the diversity of cultures. There are still places: Details & booking MOVED TO CORONA IN FALL 2020 !!

- WACHAU Invitation to the WACHAU in SPITZ on the Danube!

Ceremonial installation of the Jerusalem Dove of Peace at the city festival in MELK at 09.00:XNUMX a.m. with a hike from Melk - Spitz - Dürnstein. **INFO HERE** **GPS ROUTE MELK - SPITZ** **MEDIA REPORT** THANK YOU ALL FOR THIS BEAUTIFUL DAY! **OPEN ALL PHOTOS OF THE HIKE HERE**

* NEW from 2017: Become a supporting member - THANKS FOR THE SUPPORT!

- GPS ROUTE: The Jerusalem Way from Spain / Finisterre has started!

The cover page is in over 10 languages, for the exhibition we need name, nationality, address and date of birth. For all pilgrims who want to help mark the way, sufficient stickers are provided! This will leave your own traces for yourself and subsequent pilgrims on the way: Paths are created while walking! Order in SHOP menu or with the form in the top left.

The pilgrim pass / credential was in cooperation Archdiocese of Vienna & JERUSALEM WAY Peace Team published. The picture below shows Johann Graßer from Bavaria, he reached JERUSALEM on November 30.11.2013th, XNUMX - CONGRATULATIONS! Link to his Facebook page 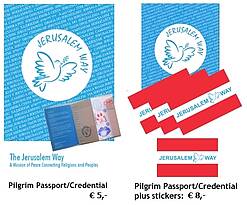 THE JERUSALEM WAY: From the end of the old world to the beginning of Jerusalem. ORF broadcast "criss-cross"dated July 9, 2013. YOUTUBE

AUDIENZ AT EASTER 2015 IN JERUSALEM

It was wonderful & unique including an audience with the Latin Patriarch Fouad Twal. The Archbishop of Jerusalem and the Holy Land supports the JERUSALEMWEG! Special thanks to Florian Hitz from the "Kronen Zeitung" for the great article!

The opening of the JERUSALEM WAY peace exhibition on April 01.04.2014st, XNUMX in the European Parliament was a great success! The international exhibition saw thousands of visitors in three days! Link to photos

(30.06.2013/XNUMX/XNUMX) The Jerusalem pilgrims and the literary star met in a small Spanish village. What an incredible, wonderful coincidence: Way of St. James meets Way of Jerusalem!

Coelho was enthusiastic and recognized the dimension of the Jerusalem Way as a worldwide peace project. There is no peace in Jerusalem, the city of peace! In this way, every single pilgrim makes an important contribution to peace in the Holy Land and at the same time Jerusalem is the Gordian knot for peace in the world. Because what separates religions and peoples we can connect in love again. 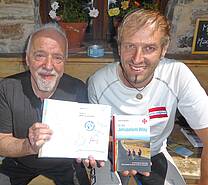 David Zwilling, Otto Klär and Johannes Aschauer received the book "On the Jerusalem Path: From the Heart of Europe on foot to Jerusalem" in the presence of Cardinal Schönborn to Pope Benedict as part of the papal general audience in Rome today, Wednesday 25 January 2012 XVI. presented and presented the Jerusalem Way.

For the three Jerusalem pilgrims, after their 6-month pilgrimage and the arrival after about 4.500 km on foot on Christmas Eve 2010 in Bethlehem, this is another very special and extraordinary highlight of their life and pilgrimage! Especially also because their “pilgrimage connecting peoples” followed the traces of the apostle Paul on the one hand and on the other hand stood under the motto “JOY - PEACE - FREEDOM”.

Personalities from politics, religion, sports & society support the peace project founded by the "Jerusalemweg Team"! The two Upper Austrian police officers Johannes Aschauer and Otto Klär made a pilgrimage with the former downhill world champion David Zwilling in 2010 from Upper Austria to Jerusalem, where they arrived after 4.500 months. The long pilgrimage took them for a month through what was then peaceful Syria, where they visited cities like Damascus or Aleppo, which are today hard-fought and destroyed.


Now this trio has the support of numerous personalities like Cardinal Schönborn, Bishop Schwarz, pastor Toni Faber, politician, how Interior Minister Johanna Mikl-Leitner, State Secretary Reinhold Lopatka, Governor Erwin Pröll, Governor Josef Pühringer, Governor Hans Niessl, Governor Wilfried Haslauer, EU MP Josef Weidenholzer, EU MP Othmar Karas, sporting greats like Franz Klammer, Annemarie Moser-Pröll, Hansi Meisnitzer etc. started an international peace project, which should point to the current situation in Syria. In this project, the entire international community is called upon to work together for peace in this region. The start of this is now a short peace video, which was made during her one-month trip through Syria.

On Thursday, November 28.11.2013th, 05.12.2013 there was a peace march along the Jerusalemweg including markings from Salzburg via Linz (Mariendom) and the Mauthausen concentration camp to Arbing. Arrival was on December 190th, XNUMX (total length about XNUMX km). THANKS TO MANY PILGRIMS!

Here is an excerpt from the media reports: Kronen Zeitung / people's aid / Tips

Please support this peace project by forwarding this information to your contacts and sharing the video on the Internet, posting. Peace concerns us all! 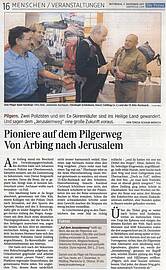 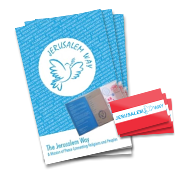